Is using solar energy to power electric cars just a pipe dream, or will it soon be a reality? For Solar Team, a student collective at the Eindhoven University of Technology, that reality is already here – or almost, at least. Proof comes in the form of Stella Vita, a prototype vehicle with photovoltaic panels on its roof that power not only the engine, but also the entire vehicle, turning it into a living space. Stella Vita is essentially a house on wheels – an idea that naturally appeals to Renault Group. That idea piqued the interest of teams at the Mobilize brand, who are constantly looking to all forms of sustainable mobility. An inspiring and creative meeting took place, during which the students were able to present their project and discover some of Renault and Mobilize’s groundbreaking concept and show cars.

On the morning of 24 September, an unusual prototype was seen whizzing around surprising onlookers in the streets of Guyancourt in Greater Paris. Hailing from the Netherlands, the vehicle had just travelled thousands of kilometres throughout Europe before heading to the Renault Technocentre. The futuristic vessel called Stella Vita is designed by Solar Team, a group of 22 students from the Eindhoven University of Technology, and has emerged as a serious opportunity in the development of new forms of sustainable mobility, as it is powered by several power sources, including solar energy. And what better than a road trip through Europe to test the vehicle in real-life conditions? And not just any road trip – a 3,000-km trip from Eindhoven in the Netherlands to Tarifa in Spain, powered solely by solar energy, to prove the project’s viability.

As a pioneer in electric mobility, Renault Group now has a specific brand, Mobilize, focusing on shared, low-carbon transport. The brand was designed to rise to the challenges of our time and is preparing for the future by exploring all kinds of alternative energy, including solar.

Along its European trip, the Solar Team presented their prototype to companies, universities and institutions. The meeting between Mobilize and these students was full of meaning and learning for everyone.
Ultimately, their aim was to inspire as many as possible and demonstrate that we can harness solar energy to build a sustainable future. 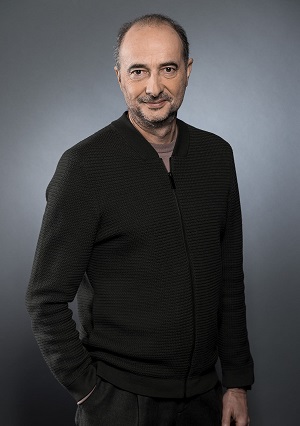 “They have explored their concept to its fullest extent. Stella Vita is a kind of mobile home that offers the features of a car – it does it all. For the students, this experience represents a shift from looking at the theory to tangibly using their ideas.”

Stella Vita’s solar panels are located on its roof. When the vehicle is stationary, the total surface of the panels can reach 17.5 m2 – eliminating the need for recharging points and giving drivers the freedom to go wherever they want, without harming the environment. On the road, Stella Vita can reach up to 120 km per hour, due to its aerodynamic design and light weight of 1,700 kilos. And, thanks to its 60 kwh capacity lithium-ion battery, the vehicle’s range can reach 600 km on a full charge – a figure that can even go up to 730 km if the sun shines throughout the journey. However, it takes 2 to 3 days to fully recharge the batteries with the solar panels when the prototype is stopped. That’s why it is also equipped with a plug to recharge it via a classic terminal, which is faster than the solar recharge. The prototype can also be plugged into standard electric charging points, guaranteeing mobility in all weather conditions. 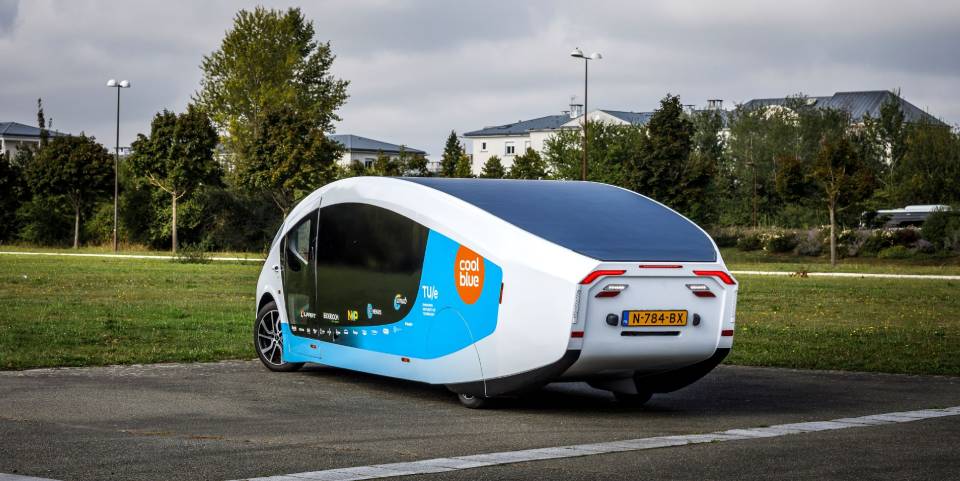 In driving mode, the total surface of the solar panels folded on the roof of Stella Vita is 8,8m2 for more aerodynamics

Solar energy collected by the rooftop panels powers the equipment in this prototype, which also functions as a living space. Renault has a long history with voitures à vivre – it’s not just a former slogan and state of mind symbolising a previous era, but an idea that continues to inspire the brand today. Stella Vita aligns perfectly with this vision and even goes further as a sort of house on wheels. According to the creators, this prototype represents the future of sustainable transportation – a mobile home where users can live and even work while travelling, powered by the energy of the sun.

“We all got together to think about it and realised that we had excess energy remaining from solar panels. We wondered what we could do with it, and came up with a car you can live in.” Lowe Blom, Aerodynamics Engineer Solar Team

When stationary, Stella Vita’s mobile roof rises to create more space inside, while the lateral wings extend, doubling the surface space of the solar panels. Want to watch tv, cook, or take a shower? No problem – the car is kitted out with a kitchen, a bed, a sofa, a shower and a toilet, all of which is powered by solar energy. An infotainment system enables users to visualise their energy consumption in real-time, giving them greater control of how they use it.

The innovation behind Stella Vita has therefore been incorporated in Mobilize’s vision and its research into the development of new, increasingly bold and sustainable mobility solutions.

This original project, which went far beyond its original educational context, is the result of the collective efforts of the students in Solar Team who come from multiple disciplines – such as mechanical and electric engineering, computer science and industrial design. That cross-disciplinary approach left its mark on Laurens Van Den Acker, the head of design for Renault Group, who also studied at Eindhoven University of Technology who had a real interest in meeting the young designers.

From prototype to production model: discovering the Renault and Mobilize concept and show cars

Laurens therefore welcomed the students to the Design studio at the Technocentre, where they could discover concept and show cars by Renault and Mobilize. It was an opportunity for everyone to discuss the future of the project and the hurdles to overcome before turning the prototype into a production model.

The founders of Stella Vita were given valuable advice – for example, learning that when working on a prototype, one of the keys to success is to differ as little as possible between the designed concept and the real vehicle that will later be sold. The students therefore understood that, when looking at the Renault 5 Prototype, that they were looking at something very similar to the future production model that will be sold in 2024. They also learned about the overall transition from design to production series when they looked at the Renault MORPHOZ concept car, the first in a new generation of electric vehicles by Renault, and the Megane eVision show car, which preceded the new Mégane E-TECH Electric, another model they got to see. The students also checked out the 2016 TreZor concept – the perfect illustration of a prototype that became reality, with its reverse L-shaped dashboard display that came ahead of the OpenR screen that can now be found in the new Megane E-TECH Electric. 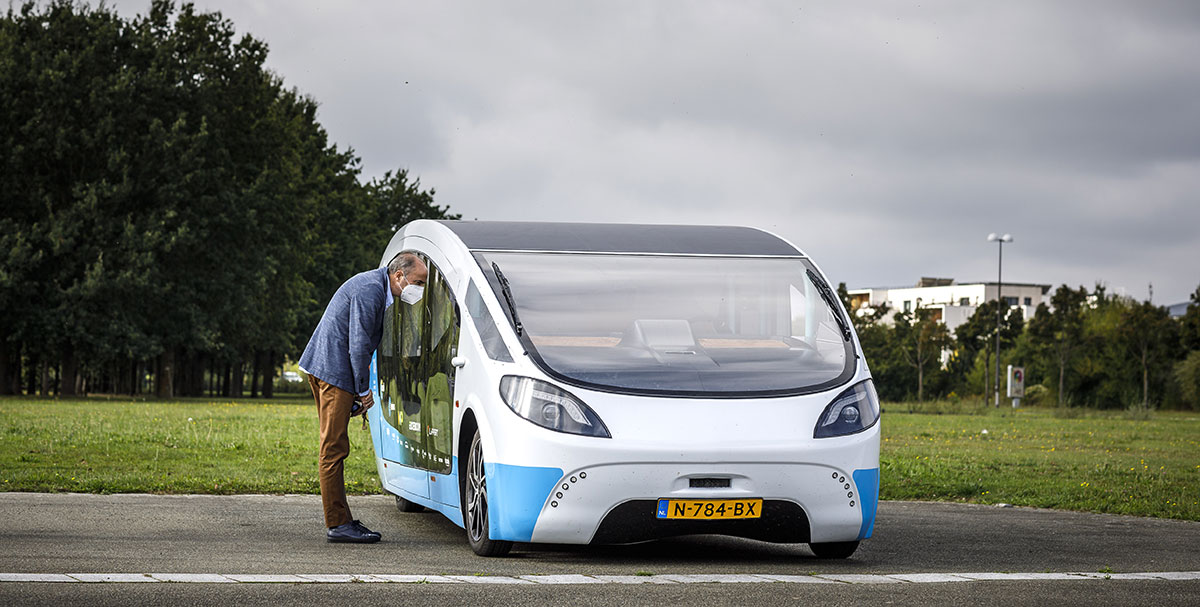 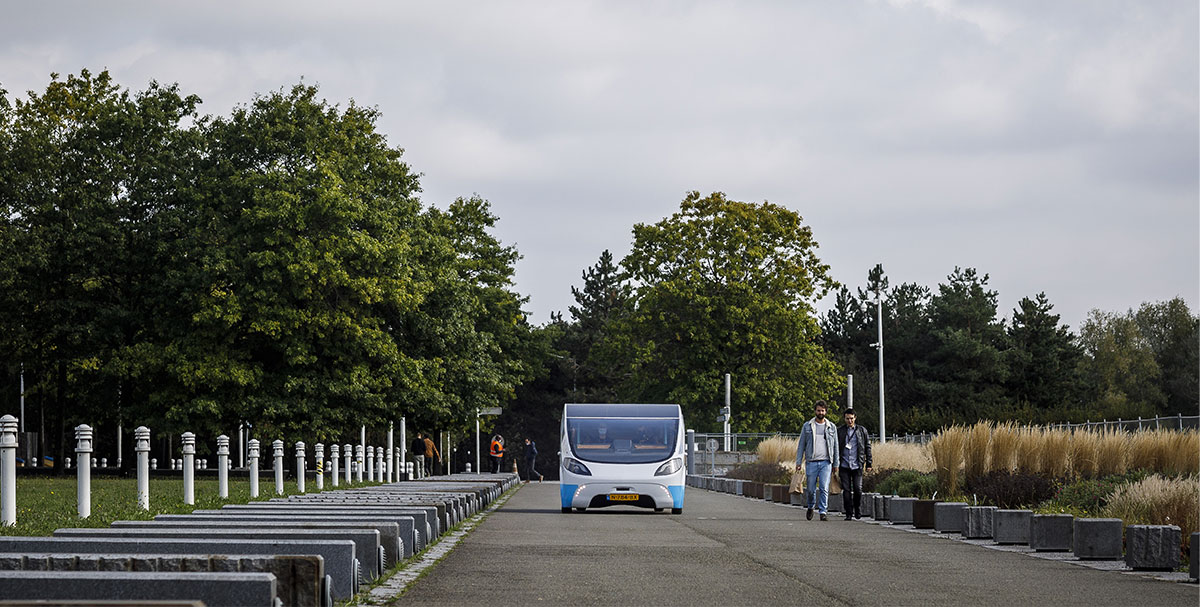 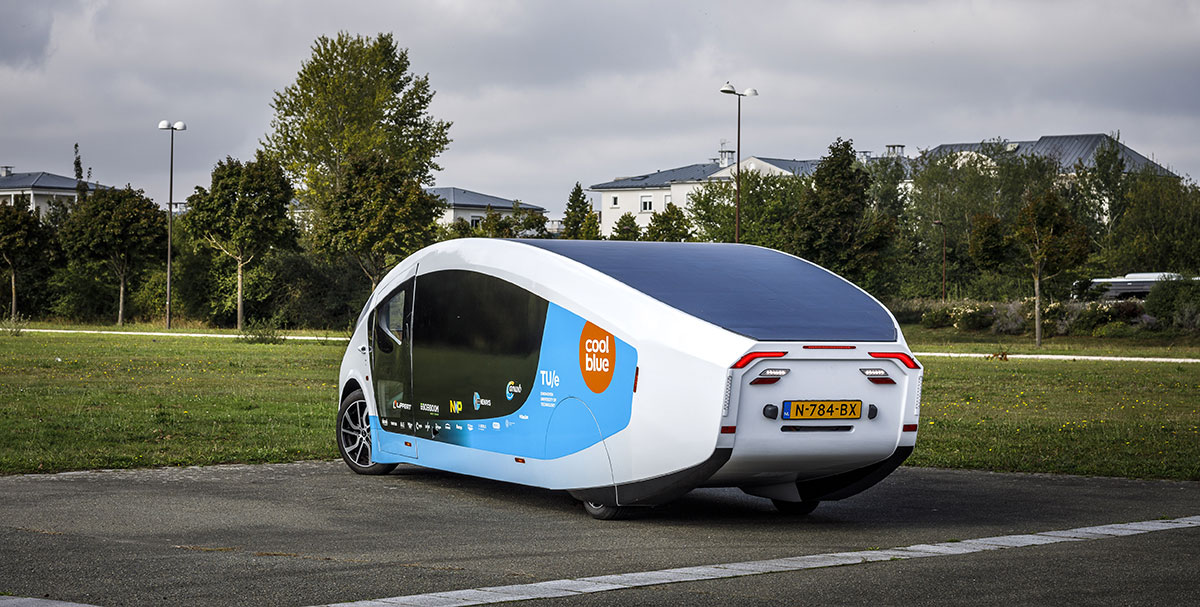 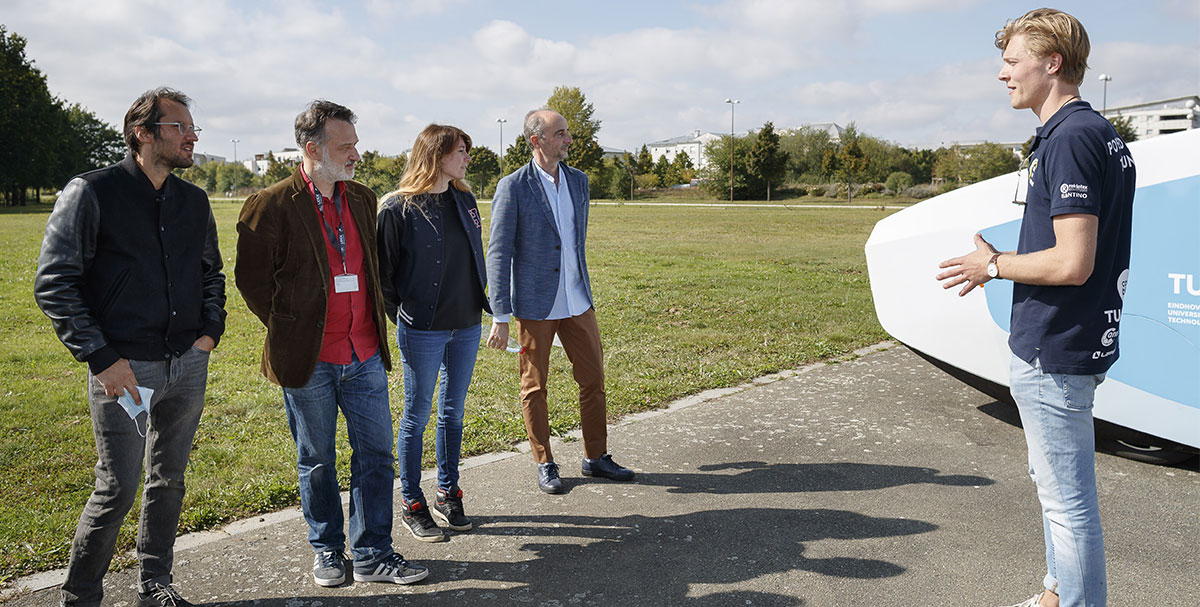 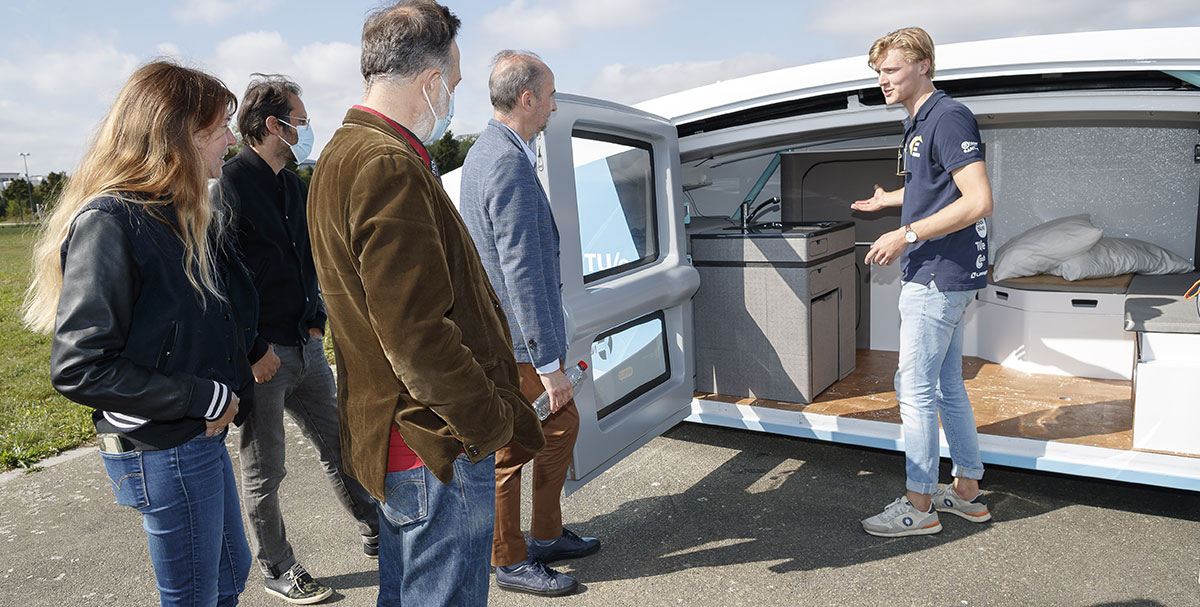 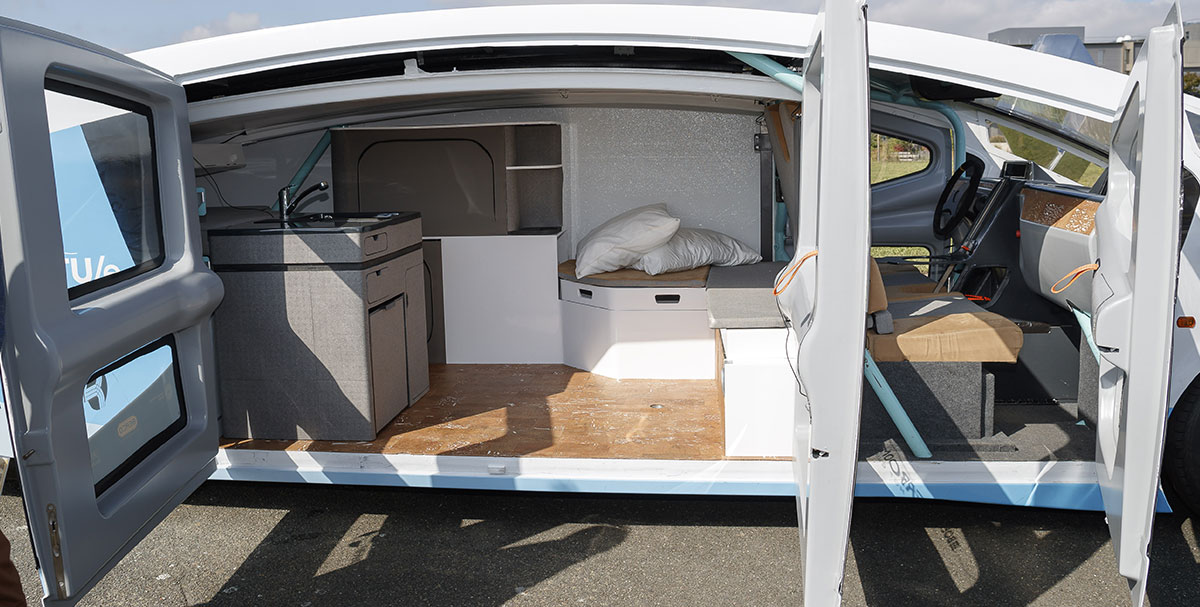 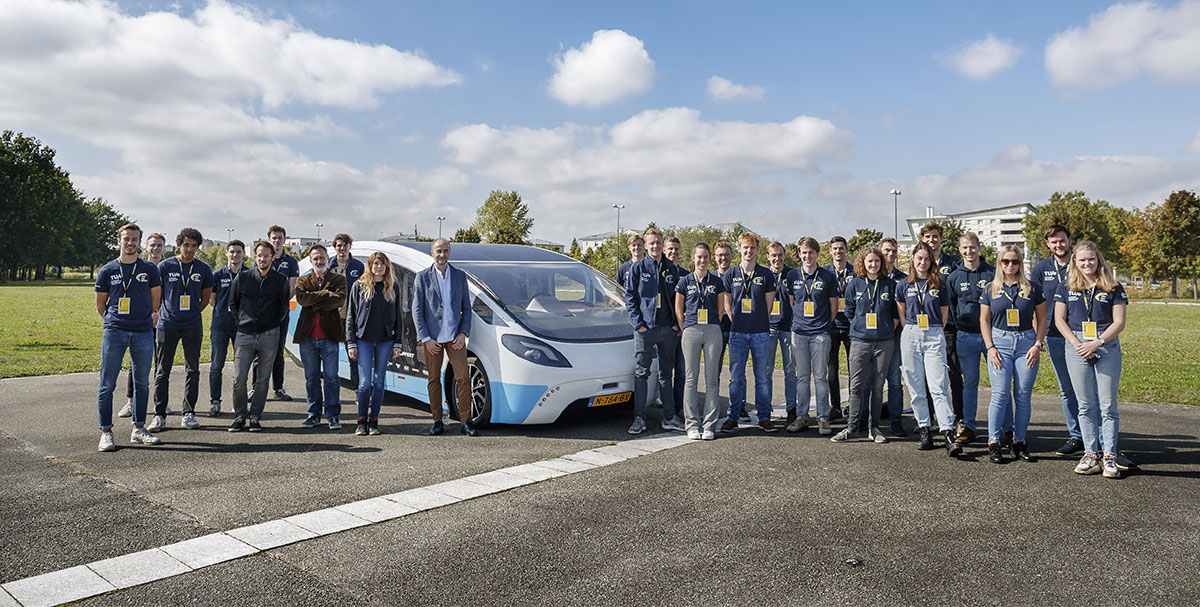 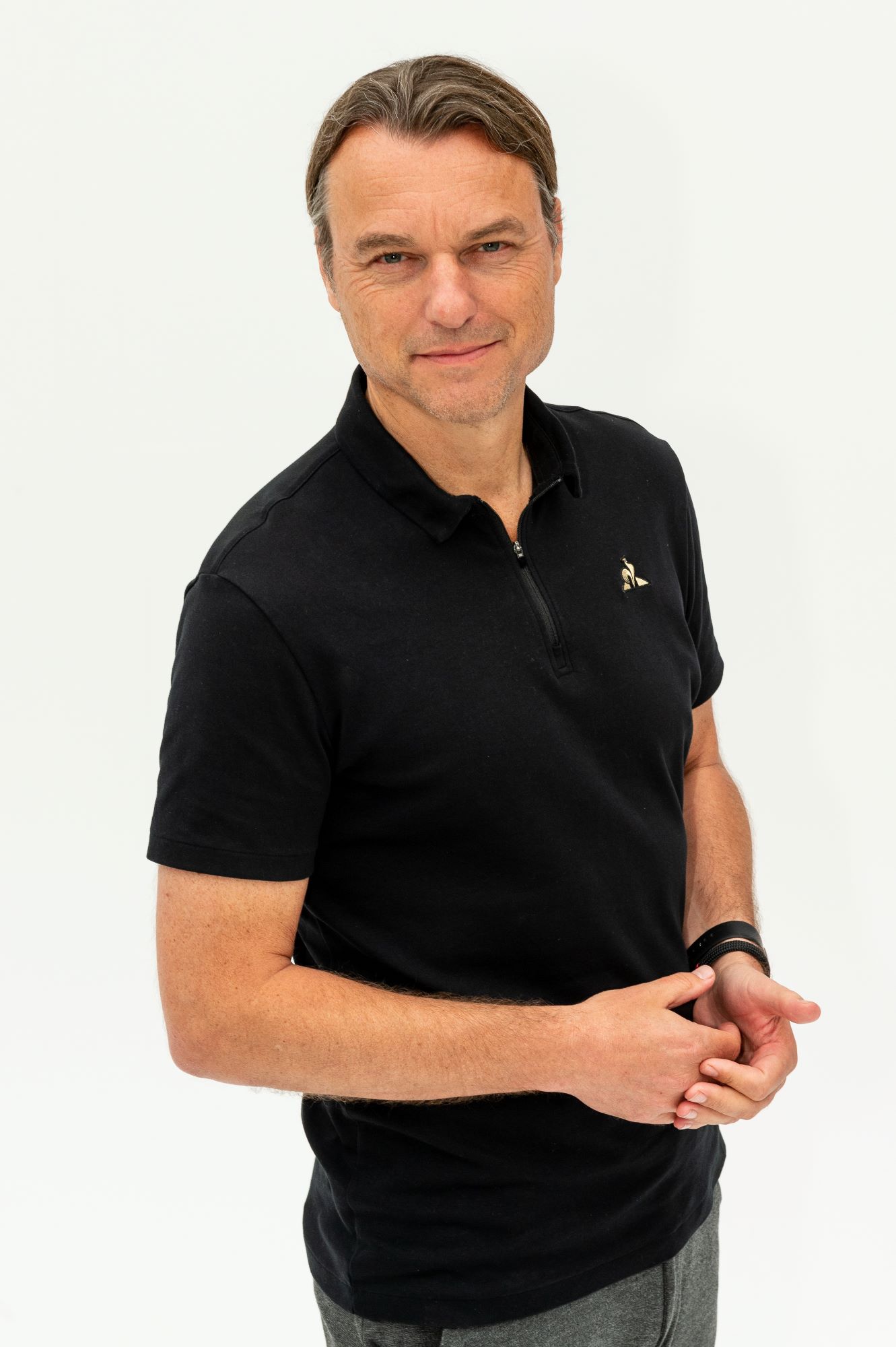 “Concept cars like TreZor and MORPHOZ portray a dream for the future, but they are also a way of exploring new solutions. We learn a lot from these experiences.”

Patrick Lecharpy, VP Design Mobilize, talked to the Solar Team students about the original aspects of the creative process behind the brand’s vehicles. Teams design the vehicles as a genuine service, using a creative approach that differs from that used by more traditional brands. The designers do not start out by drawing a vehicle; rather, they think about the overall experience of sustainable mobility and services that could assist not only users, but also operators and cities as a whole.

“Current vehicles are not suited to shared mobility. We need to design new, different vehicles that meet emerging uses and needs. In the future, vehicles will become more connected, stronger and sustainable over time.”

Duo and Bento are two concept cars by Mobilize that were presented to the students and represent the brand’s ideas for solutions to help cities in their transition towards sustainability mobility solutions. Duo, a small electric and connected vehicle for shared mobility in urban areas, was even presented using augmented reality so that the students could best discover the range of services it will offer. One of the students in the Solar Team that we spoke to recalled its capacity to provide a genuine solution to the challenges of urban mobility:

“Mobilize Duo is an excellent way of optimising vehicle traffic in urban areas, and it is much more energy efficient than conventional vehicles.” 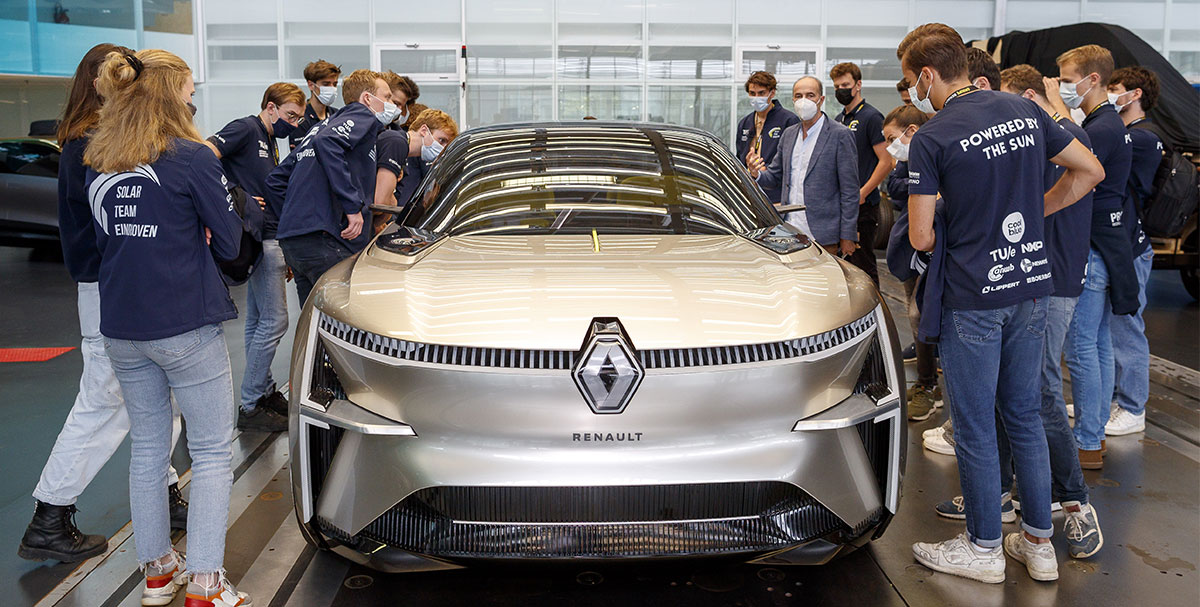 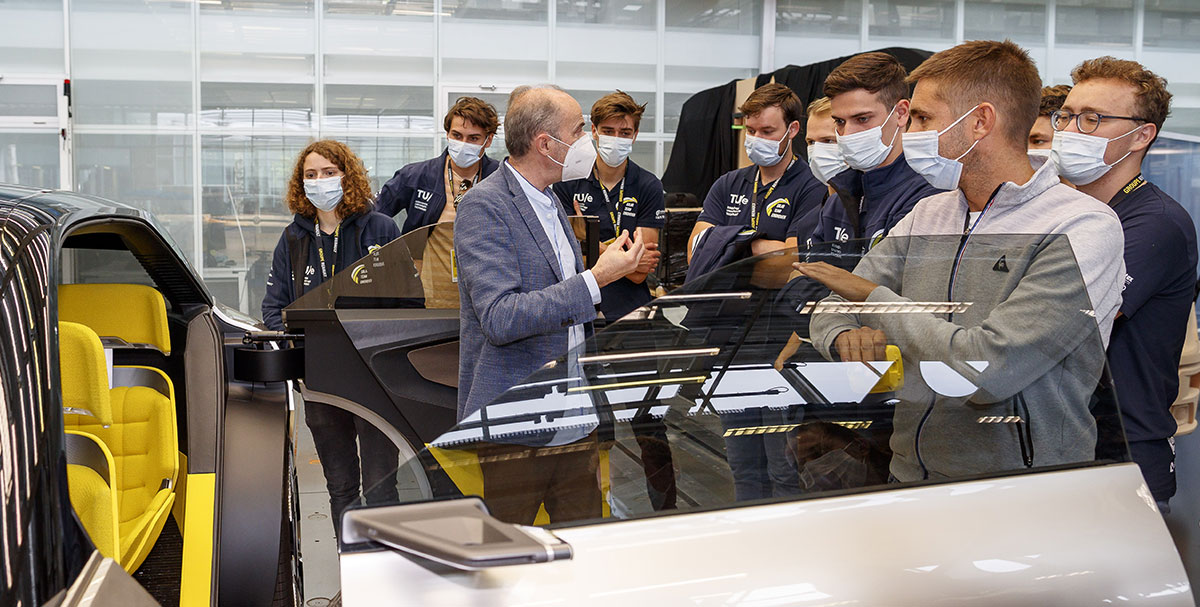 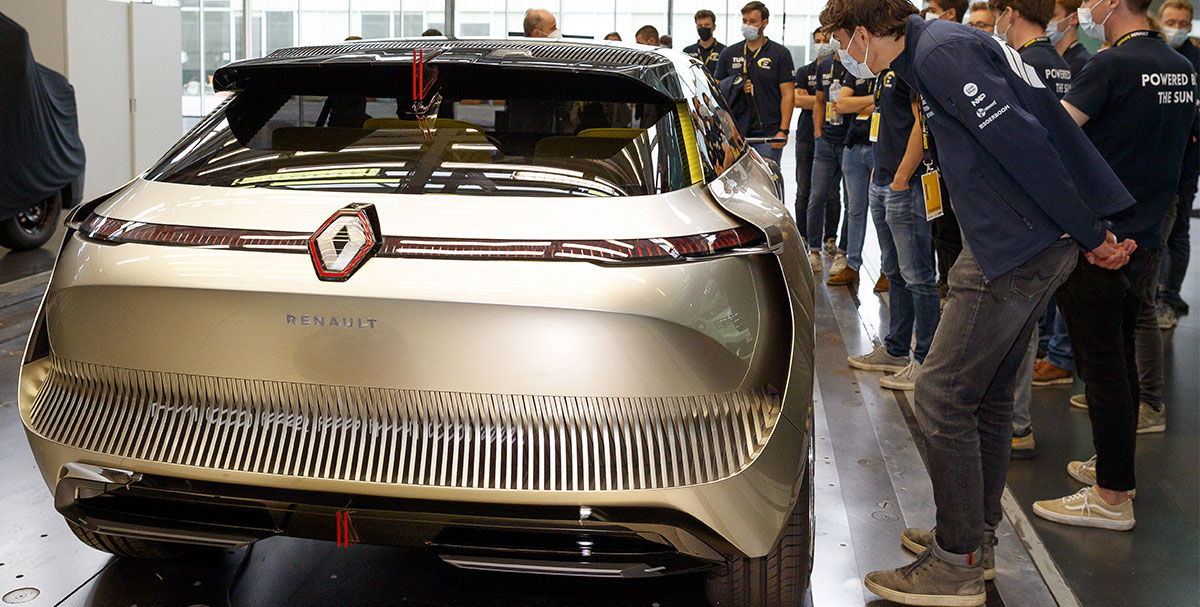 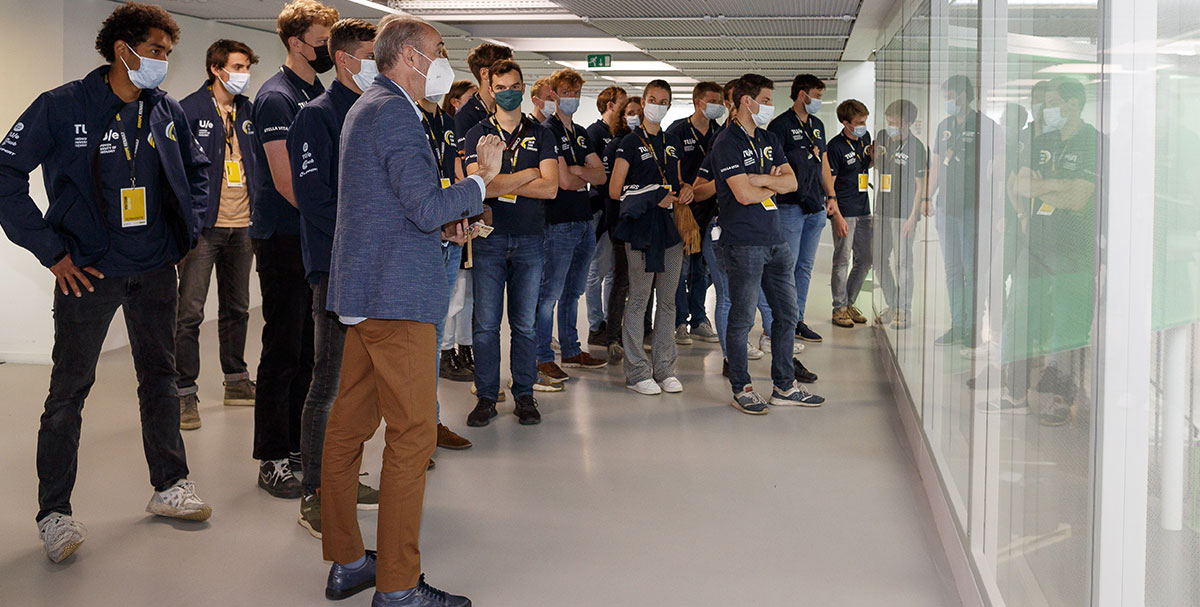 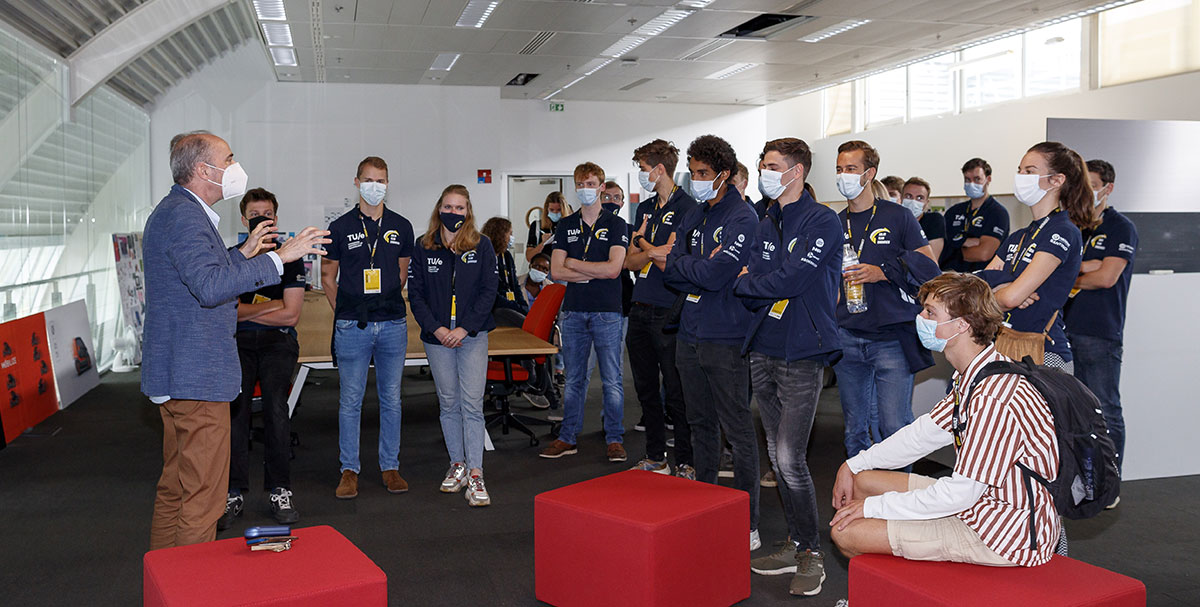 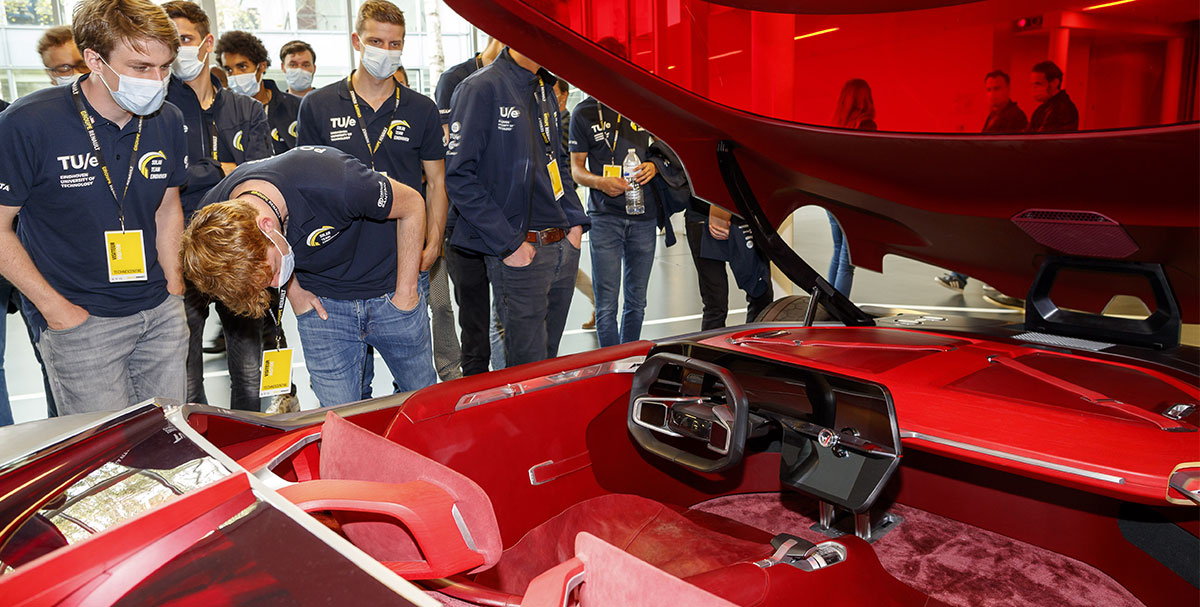 This meeting provided the beginning of an answer to the question on everybody’s lips: will we soon be able to drive vehicles that are powered solely by the sun’s rays? The students at Solar Team think that Stella Vita is a first look at solar mobility, which should roll out in 2030. But major technological developments in photovoltaics and batteries will be needed for large-scale deployment. The team could harness Mobilize’s research on using renewable energies to power electric vehicles, as seen on the “smart island” of Porto Santo, Portugal. 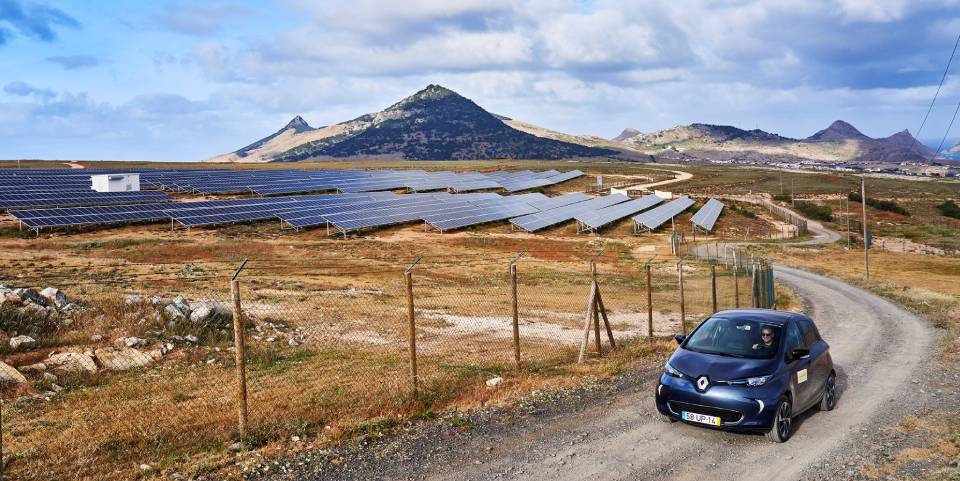 In any case, the sun is shining on Stella Vita and the project’s ambitions. Mobility and renewable energy are a winning combination to tackle the complex crossroads of the environmental transition and the automobile industry. 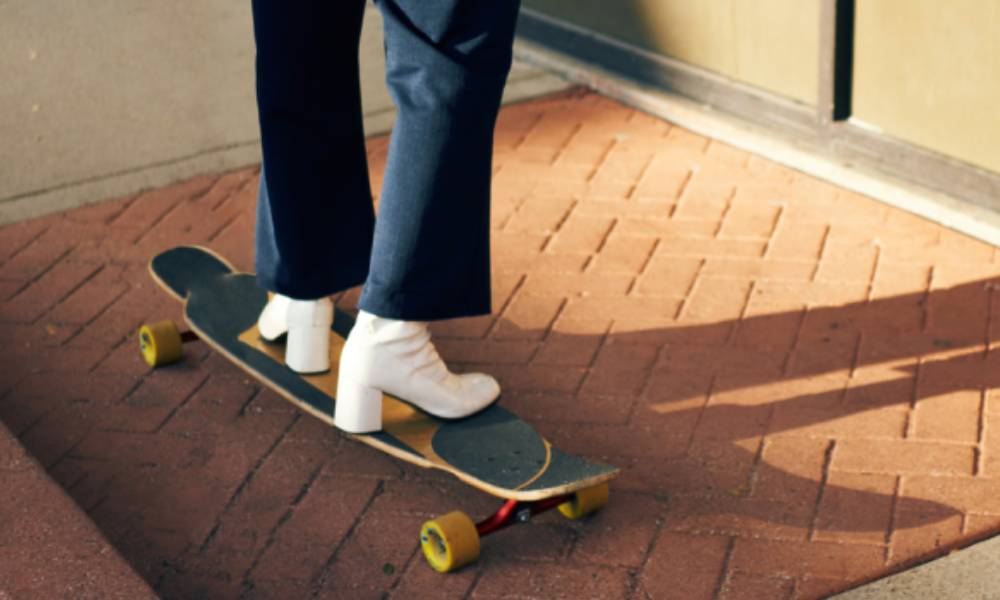 where do we stand on shared mobility?

where do we stand on shared mobility? 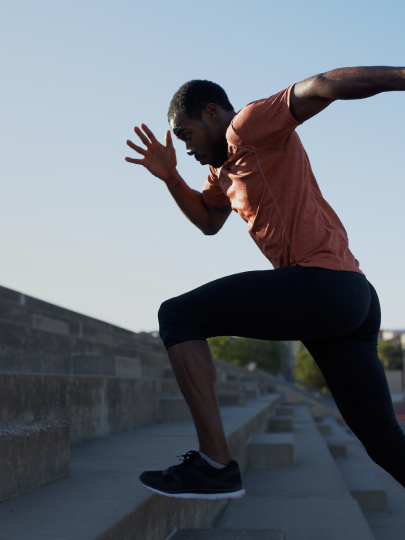 users want to travel in a decarbonated way, without having to own their vehicle 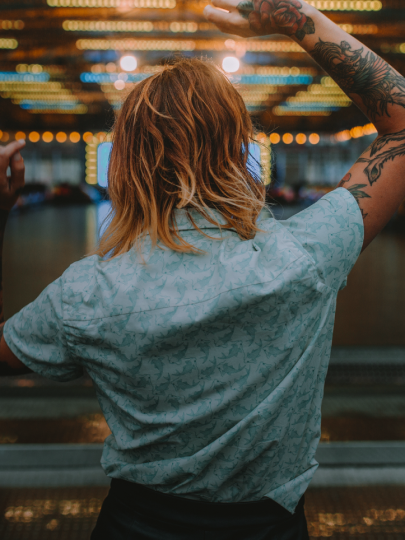 why make the all-electric choice?

why make the all-electric choice?

car-sharing is on the rise

car-sharing is on the rise

When it comes to consumer trends in automotives, habits are changing: more and more customers are increasingly interested in how they use rather a vehicle rather than owning it. 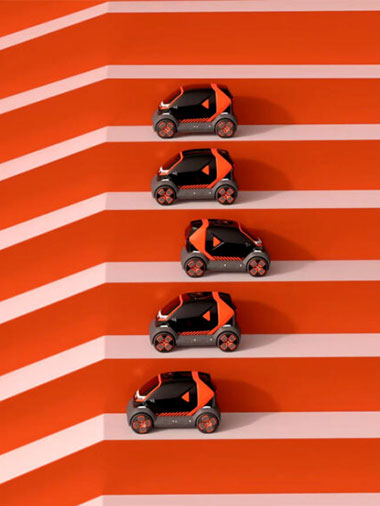 Mobilize, draw me an experience

Mobilize, draw me an experience

Responding to the challenges and problems of travel in urban areas, designing a comprehensive experience,